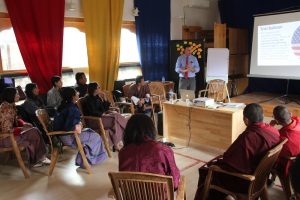 Participants found the News and Media Literacy most relevant in the age of digital information.

Increasing number of people including the members of civil society, teachers, nuns, and monks found News and Media Literacy workshop relevant and felt the need for more such workshops across the country.

Bhutan Centre for Media and Democracy conducted another round of News and Media Literacy workshop for members of civil society orgsanisation (CSOs) on 29-30 June. Over 24 CSO members including communication officers and programme officers attended the workshop. A monk from Gangtey Monastery in Wangdue Phodrang and two nuns from Pema Chholing Nunnery in Tang, Bumthang were among the participants.

In the wake of increasing number of controversial and misleading posts on social media, participants felt that the News and Media Literacy could be an answer to online confrontation. “If people had attended media literacy before, the recent incident of a video of a group of boys bullying another boy would not have happened,” Thinley Wangdi from Khengrig Namsum Cooperative in Zhemgang said.

But Thinley said that the requirement of media literacy is, even more, greater in rural areas. “News and media literacy training should be brought to rural areas since rumours and misleading information on social media is causing many problems in the communities,” Thinley Wangdi said.

Other CSO members felt the need to spread media literacy to more members of CSOs, youth, and school children since most are active on social media. “I will definitely talk about media literacy and social media with my family members,” Yeshey Wangmo from Bhutan Network for Empowering Women said.

BCMD would like to than Helvetas for supporting the workshop.