Teachers were educated on being a smart news consumer. 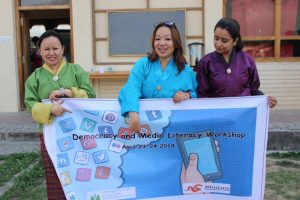 Teachers were educated on being a smart news consumer.

Teachers from a number of private schools and colleges in the country were trained on Media and Democracy Literacy during a two-day workshop Bhutan Centre for Media and Democracy conducted from April 23-24 at its Media Lab in Nazhoen (Youth Development Fund) Pelri Complex in Thimphu.

A total of 24 teachers and lecturers from private schools and colleges including, Norbuling Rigter College in Paro, Sherub Reldri Higher Secondary School in Mongar in the east, Kuendrup Higher Secondary Schoo of Gelephu in the south attended the training. Four teachers from the public schools including, Tendru Central School from Samtse and Wangbama Central School in the outskirts of Thimphu also attended the workshop.

Media and Democracy Literacy is one effective activity BCMD has been conducting over the years to educate teachers and youth to be a smart consumer of news — in the age — where news finds its readers and goods and services finds its consumers. People no longer have to spend hours looking for news and goods and services, they are all now only a click away. Instant availability and access to information have changed the dissemination of information, communication, business, and entertainment. The unprecedented growth in ICT and technology has changed lifestyle across the board.

But all is not well. The onslaught of information online has caused disharmony, discord, confusion, and chaos in the society. Often, harms of social media have led to misinformation, crime, and violence. Bhutan had its own share of such issues because of its ill-preparedness to negative effects of social media, fake news, and disinformation because of people lacking knowledge and understanding of news.

BCMD for last few years has been training teachers, civil servants, and youth on News and Media Literacy to educate on the citenzenship, democracy, rights and responsibilities, and news and media. This time the workshop was conducted for teachers and lecturers from private schools and colleges. Teachers attending the workshop found the workshop relevant to their school media studies curriculum. According to teachers, the workshop did not only educate them on democracy, citizenship, news, and media but would go a long way in helping them impart the knowledge about news and journalism to their students taking media studies in schools.

“The workshop will really help us in classroom teaching about the media studies,” said a teacher from Jampel Higher Secondary School in Haa.

Another teacher from Nima Higher Secondary School, ….. said that the workshop was important for her to attend as it helped her cement the understanding about news and its difference between the information, social media posts, fake news, and judging the credibility of a news report. “I knew what is news but this workshop really helped me understand the difference between news and other information,” she said.

During the workshop, a copy of the Educating for Citizenship Guidebook was also distributed to each participant. BCMD developed the guidebook as a resource for schools to help educate students on being a smart news consumer. Bhutan Centre for Media and Democracy would like to “Thank” Bhutan Foundation for supporting our initiative to inspire and support youth and teachers to be smart consumers of news.