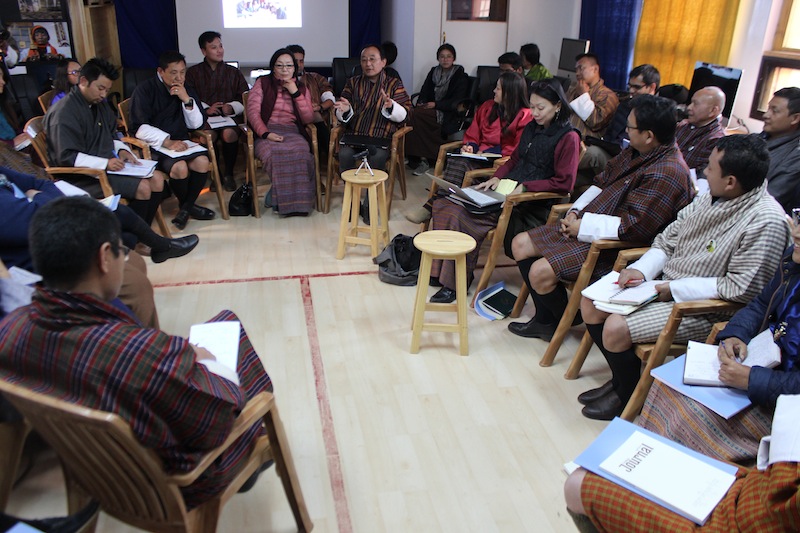 “Sustainability” of CSOs was one of the main issues discussed during ‘The Druk Journal’ conversation held on February 9 at BCDM’s Media Lab at Nazhoen Pelri Complex. Over 41 people including the CSOs, representatives from Civil Society Organisation Authority, and educationists joined the conversation to share their ideas and thoughts on civil society.

“Always learn to say ‘Thank You’ no matter how big or small the contribution is,” Dechen Dorji

During the conversation sustainability and fundraising were two dominant issues on, which discourse was held at length. One of the writers of the journal’s sixth issue, “Civil Society in Bhutan,” Lam Dorji said that the biggest challenge for emerging CSOs is more to do with sustaining their activities.While proposals seem to be one of the ways to raise funds to sustain CSO activities, some of the prominent figures that worked in donor agencies have pointed out that the Bhutanese lag in writing compelling proposals.

WWF Country Representative, Dechen Dorji who also contributed an article said that the fundraising is science and requires a lot of skills. But he also shared that there are enough resources out there if people know how to leverage. “So it’s really about organisations yourselves and the way we do fundraising,” Dechen Dorji said.

The other simple trick for fundraising, he said is to be thankful. “Always learn to say “Thank You” no matter how big or small the contribution is,” Dechen Dorji said.

Speaking on the similar line, Bhutan Foundation Director of Development and External Relations, Tshering Yangzom reiterated the need to say “Thank You”. “That’s the biggest part we see missing from a lot of our CSO partners,” Tshering Yangzom.

“Even writing a simple note directly to the donor saying “Thank You” for the contribution you provided for helping Bhutan, I think that in itself makes a huge difference,” she said.One advantage that she said the Bhutanese CSOs have is that the donors come to Bhutan to look at their projects. “CSOs in Bhutan have the opportunity to show the donors of what they are doing on the ground,” she said.

The Conversation was supported by Helvetas Swiss Intercooperation.